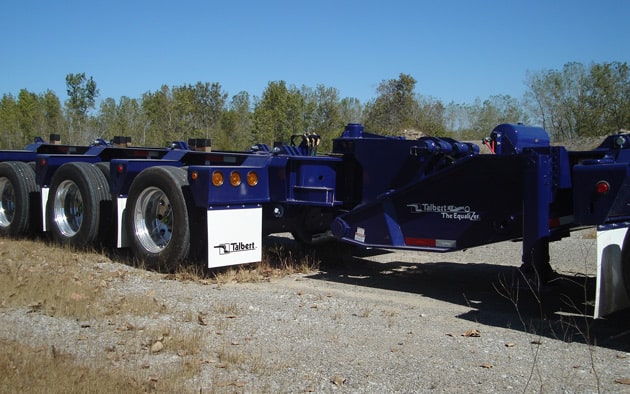 US company Talbert Manufacturing has introduced a new axle extension featuring a nitrogen-assisted equalizing system. Aptly named E3Nitro, the new extension is part of a larger series formerly known as the Equalizer range, which also includes the E2Nitro and E1Nitro, boasting three, two or one pin-on axle(s), respectively.

“The E-Nitro system, with its nitrogen accumulator, oscillates around a central self-tracking pivot points to provide proportionate weight distribution in each axle grouping,” Talbert explained.

By using a nitrogen accumulator, Talbert’s E-Nitro system hydraulically sets axle load capacity and keeps it there as the system equalizes up and down articulation. According to Talbert, this provides a “much safer and more stable platform” that virtually eliminates bridging of the spreader, a situation in which entire load rides on the rearmost axle.

“With the E-Nitro series, Talbert is able to build trailers with capacities well beyond what can be achieved with simple mechanical or rigid axle extensions.”