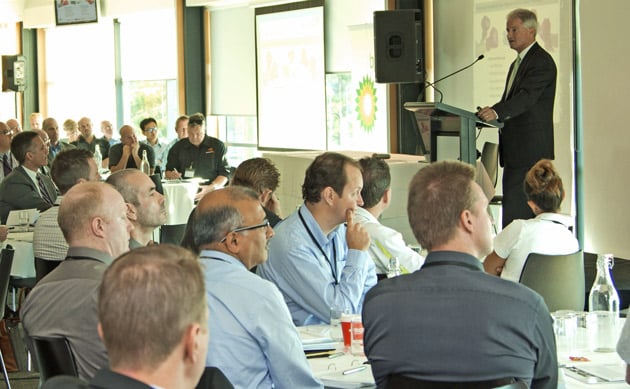 The first-ever Global Truck & Trailer Leaders Summit (GTTLS) saw more than 100 industry executives from around the globe travel to Melbourne last week to share both professional and personal views on the future of the transport equipment industry with a select audience.

“The idea was to create a new and high value business conference, and I believe we have delivered on the brief,” said ARTSA Chairman, Dr Peter Hart. “It’s been an experiment as no one has ever attempted to establish a global business gathering in Australia for this industry, but the feedback we received was more than positive. It’s been amazing to see so many world-class executives convene to openly discuss the state of our industry and where to move next.

“Looking back, it’s hard to say who the main act was, as every presentation provided a unique insight into a different field. That consistency is exactly what made the event special.”

Held at a Lifesaving Victoria, an exclusive venue overlooking Melbourne’s iconic beach waterfront, the inaugural Summit was sold out when Mike Dozier took the stage for his first public address since taking over as Managing Director of PACCAR Australia in 2013. During his address, Mr Dozier explained how the US and Australia can learn from each other in vehicle development and pointed out that cost control and efficiency will be key directives for the OEM scene going forward.

Mr Dozier’s highly anticipated presentation was followed by a second keynote address, delivered by Dennis Mooney, Group Vice President, Global Product Development at US powerhouse Navistar.  Mr Mooney highlighted that emission standards and regulations are often not aligned with customer priorities, making it increasingly hard for the OEM community to meet the requirements of all stakeholders involved. According to Mr Mooney, one strategy to find the right balance and create added value is the employment of smart support systems, some of which he previewed in Melbourne.

Day one also included a keynote address by Dick Giromini (pictured above right), President and CEO of Wabash National, the largest trailer manufacturing business in the US, who revealed some of the strategies that helped himself and the company manage through the Great Recession and expanded on future demand drivers in the North American manufacturing market.

In addition, Mr Giromini also shared his personal views on leadership, saying that engaging workforce, suppliers and customers alike was key, next to diversification, differentiations and customer support. “Most importantly, have passion for what you do,” he concluded.

Following Mr Giromini, Panus Watanachai (below left), CEO of Panus Assembly in Thailand, explained why Southeast Asia could be the ‘place to be’ for the transport equipment industry in the decade to come and pointed out that local OEMs are now gearing up to challenge established brands in the developed world.

Honouring the equally complex supply side of the industry, Steve Tabbachiera, Managing Director of buyparts.com.au, gave the audience a unique insight into the world of e-commerce and provided strong evidence that online retail and wholesale is a trend that cannot be ignored.

Detlef Borghardt (bottom right), CEO of global equipment powerhouse SAF-Holland, then went on to explain how even a highly diversified international business can maintain a consistent brand image, pointing out the importance of branding and marketing in a globalised market that is more competitive than ever before.

ARRB Group’s Dr Charles Karl, GTTLS host Dr Peter Hart and the National Heavy Vehicle Regulator’s Les Brusza finished off day one with a unique insight into the complex world of global regulation and legislation – both from a global and a local point of view. Afterwards, attendees and speakers met at the National Galleryof  Victoria for an exclusive Networking Dinner as part of the event.

Day two of the event started off as thought-provoking as day one ended, with Peter Voorhoeve, newly appointed President of Volvo Group Australia, sharing his vision for the Swedish truck make in Australia and attempting to answer the highly controversial question of how far globalisation can go in the trucking industry.

Mr Voorhoeve was followed by Simon Humphries, Chief Engineer of Product Strategy at Isuzu Australia, who gave the audience a historic overview of Australia’s connection to Japan and shared some of the key lessons learnt during Isuzu’s 25-year-stint of market leadership.

The much-anticipated highlight of day two was Dr Peter Hart’s keynote address, who used the occasion to give the audience a first look at a new set of data derived from Australia’s commercial vehicle registration database.

“Up until now, we haven’t had access to a comprehensive set of truck and trailer registration data for the Australian market, so being able to present such a detailed overview today is a historic milestone,” Dr Hart said – revealing that the average age of an articulated trailer in Australia is about 14 years, while the average truck age is 15.5 years.

He added, “Today was a significant step towards achieving more transparency in our market. Going forward, we will be able to present a quarterly summary of registration data to the industry.”

Day two also included a presentation by Tim Walker, Executive Vice President of Sales, Asia at US company Truck-Lite, who gave the audience a sneak peek at the next generation of LED lighting and explained why savvy suppliers will play a key role in driving change over the coming decade.

Switzerland’s Heinz Oesch elaborated on that notion by describing how electronics company Huber + Suhner engaged in the development of alternative drivelines for the Swiss retail industry, actively sharing knowledge with the OEM industry to drive change.

To also give the market a voice, the event then staged a panel discussion featuring those who influence truck and trailer speccing in an increasingly transparent procurement environment – including Craig Porter, National Fleet and Asset Manager at supermarket giant Coles; Tim Kehoe, General Manager of Toll Liquids; and Tony Cranley, Logistics Contracts Manager at Bluescope Steel. All three agreed that pricing would always come second to safety and innovation, urging the market to step up and bring new technology forward.

Day two ended with a panel discussion debating the future of Australia’s manufacturing sector, which is currently facing a large-scale restructuring challenge after the loss-making car industry has turned its back on the continent. Hosted by John Murphy, Managing Director of Prime Creative Media, and headlined by Austube Mill's Arun Syam, the final session explored just how much potential is left in the commercial vehicle segment of the industry and try to find future strategies for sustainable growth inside Australia. Part of the panel were Alastair Lang (General Manager, Vawdrey Australia), Marcus Reid (General Manager, FTE), Todd Hartley (Managing Director, Hilton Mfg.), Mitch Peden (Vice President Sales, Volvo Trucks) and Senator John Madigan.

“It was the perfect mix of global content and local insight,” Dr Peter Hart concluded after the event. “We wanted to provide a stimulating networking opportunity outside the classic conference environment, and I believe the Summit turned out to be the inspiring industry gathering we envisioned it to be.”