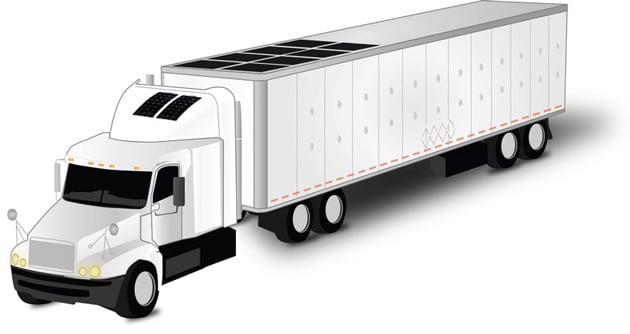 The ‘Solar Flex’ system can be fitted to the roof of a trailer and was designed to keep battery-powered cab-comfort systems fully charged.

According to Go Power, the thin and flexible  panels were originally developed for the RV industry, where AC power loads and HVAC climate control demands are similar to those of a small cottage.

“The Solar Flex panels were designed to contour to the roof of an RV and to allow the vehicle to operate completely autonomously for weeks at a time, with no need to connect to shorepower or any other supplemental power resource,” said Sean O’Connor, Sales Channel Manager for Go Power North America.

According to O’Connor, the Solar Flex system has the ability to produce about 100 watts-per-foot of trailer length. “A 53-foot (16m) trailer has the roof area to hold approximately fifty 100-watt Solar Flex panels and to generate about 5,000 watts, or about 280 amps, of DC power per hour,” the company said. “When combined with a Go Power inverter, a system can produce up to 3,000 watts of AC power per hour.”

One company already using the technology is Cummins Crosspoint, which was looking for a reliable solar-based method for keeping the dedicated batteries used in Carrier Transicold refrigeration units and ClimaCab battery-powered cab-comfort systems optimally charged.

“We have been looking for a practical solar solution for battery regeneration for a while, but the rigid-panel systems we found couldn’t stand up to the shock, vibration and debris strikes that vehicles commonly encounter; plus, they were heavy and bulky,” Joe Aschenbener, General Manager for Crosspoint Power & Refrigeration, said.

“The light, thin Solar Flex system is bendable, can mount almost anywhere and is so durable, you can drive over it without significantly damaging it.”