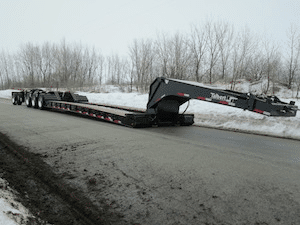 According to Talbert, the new 55SA-LD model and can run on three axles, four axles close-coupled or as a 3+1 spread-axle.

“The new, highly versatile trailer is an optimal solution for haulers who need the flexibility of a low deck height and the flexibility to run a variety of configurations,” Talbert said in a press release.

“The extra two inches provide a tremendous advantage for haulers who need to haul heavy and oversized equipment under bridges or through tunnels with low clearance rather than making trips around.”

Talbert’s E1Nitro system makes the spread between the third and fourth axles possible. “The system articulates left and right and uses nitrogen to equalize the up and down movement to provide proportionate weight distribution in each axle grouping.

“Through a combination of hydraulic and nitrogen equalization , the E1Nitro absorbs hauling and loading shocks, and provides a greater range of suspension movement for reduced stress and a smoother ride.”

The system also acts as a hydraulic shim point between the trailer and the spreader. It also incorporates two-speed dual landing gear for greater stability when the E1Nitro system is disconnected from the trailer.