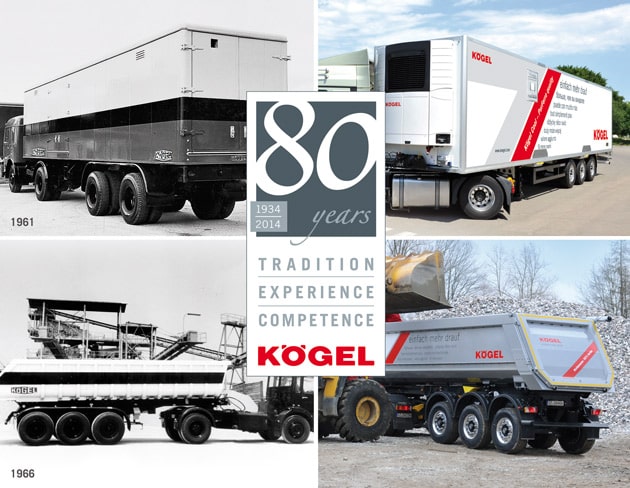 What do US actress Shirley MacLaine, the wire race bearing, Fujifilm and the most famous duck in the world – Donald Duck – have in common with German trailer manufacturer Kögel? They all celebrate their 80th birthday in 2014, and they are all going strong as ever.

While Kögel’s actual birthday is on 1 May 2014, the anniversary will be celebrated all throughout the year, for their customers, colleagues, suppliers and everyone interested in Kögel.

According to Kögel – now one of the three leading trailer manufacturers in Europe – there have been some “ground-breaking” innovations over the past 80 years that will be remembered over the course of 2014 – including the first refrigerated semi-trailer in fully plastic construction (1961), the first demountable platform with support legs (1965), the first self-supporting aluminium round tipper body (1966) and the patented centre axle tipping trailer (1974).

The company is also responsible for the first cathodic dip-paint coating plant for optimum corrosion protection for vehicle frames (2001), the 1.3 metre extended Euro Trailer (2005) and, most recently, the CNG Trailer (2012).

“In our sector, nothing counts more than tradition, experience and competence. This benefits all of Kögel's customers. It applies also to those who want to become our customers,” said CEO Thomas Heckel.