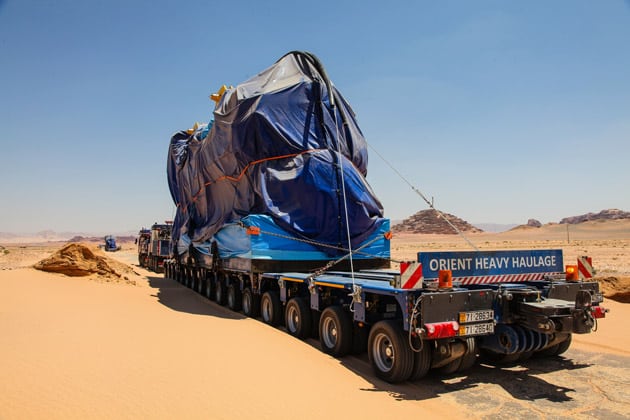 Belgian heavy equipment specialist Faymonville said it will focus on expanding in the booming Middle East in 2014.

“For a long time, the Middle East was a blank spot on the Faymonville Group’s map,” the company said in a statement, revealing that it has now managed to “open some important doors” in the region.

Led by Regional Sales Manager, Julian Thelen, the company has recorded “substantial sales results” – including the delivery of 24 modular axle lines to Jordan and 20 to a client in Abu Dhabi. Faymonville vehicles are also operating in Iraq, Qatar, Bahrain, Jordan and Oman.

“The initial phase was productive and encouraging. There are more and more concrete projects [coming up]“, Thelen said.

“Orient Heavy Haulage successfully completed the transportation and installation of an IPP3 project, which will be the world's largest tri-fuel power plant,” he explained. “The plant is powered by a total of 38 Wärtsilä 50DF multi-fuel engines – each of them weighing 295 tonnes. To move them, the G-modules from Faymonville were just the right choice.”

According to Thelen, retaining a regular presence in the field is vitally important. “We have to be seen, again and again. The contacts in this region attach great importance on personal interaction, which then gradually gives rise to trust – which is the prerequisite for closing a deal.”

According to Thelen, Saudi Arabia is and remains a complex market where constant customer care is the alpha and omega of business relationships. “Therefore it sometimes requires three to four contacts before the real decision-maker shows up at the table”, he says – pointing out that wind energy, although still a small industry, could become the ‘next big thing’ in the region.