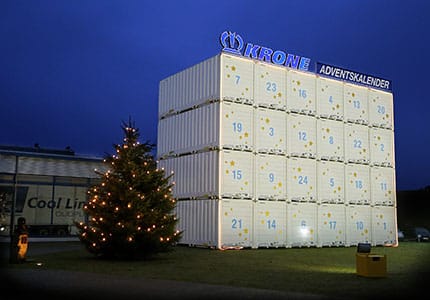 German trailer brand Krone is celebrating the festive season with the creation of a giant advent calendar, supersizing a century-old German tradition for a good cause.

The 15m x 11m Christmas countdown is based on 24 stacked swap bodies and placed right outside the entrance hall of the company’s head office in Werlte, Germany.

Every weekday from 1 to 24 December, one door will be opened to reveal a different “gift” to charity.

“Every swap body contains a different donation to a charity. The donations have not only been provided by Krone, but also by our suppliers. We are delighted that 14 Krone partners spontaneously agreed to take part in the project,” said Tobias Eichberg, Krone Marketing Manager.