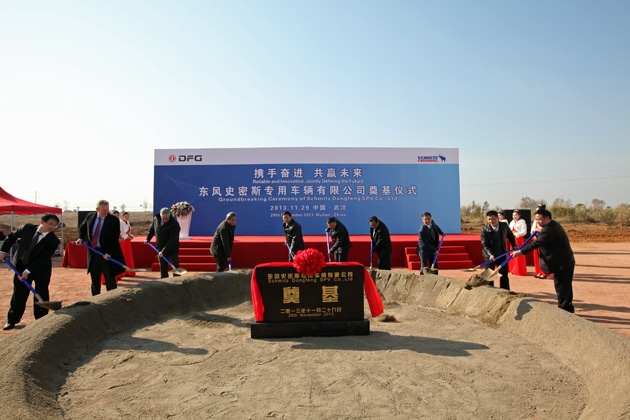 Germany's largest trailer building company had entered into a Joint Venture with China's Dongfeng Motor Group last November to co-operate on the design and manufacturing of semi-trailers for the Asian market. The construction of the Wuhan plant is the first joint project since the €100 millionfive-year contract was signed.

“The close co-operation and open attitude of the governmental authorities and industry have made it possible to complete the planning and preparatory work for the new production facility very quickly after signing the contract,” said Andreas Schmitz, member of the board of Schmitz Cargobull, and CEO of the Joint Venture.

The 30,000 m2 production facility will be built on a spacious 150,000 m2 site. Annual production capacity is expected to be 40,000 semi-trailers once the factory is running at full steam, with an initial run of 2,500 units during the first year in operation.

According to Schmitz Cargobull, annual production is expected to gradually increase from there until 2017.

Reportedly, the company is already busy testing prototypes of the new Asian line-up in China. “The use on unsealed roads is a day-to-day occurrence in China. Despite the regulations, overloading is a common occurrence. That is why the trailers have to be especially robust,” Schmitz explained at the Wuhan ceremony.

Trailer production in Wuhan is slated to commence as early as the second half of 2014. While Schmitz Cargobull will provide the manufacturing know-how, Dongfeng will handle trailer sales, customer service and other services, as the company possesses an extensive network of dealerships and service partners throughout China.