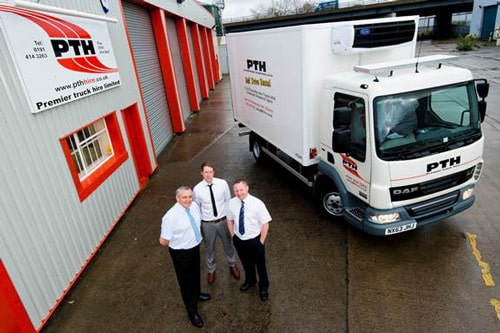 Founded in 1993 by Maurice Tailford, family-owned Premier Truck Hire made its name as a specialist provider of rental vehicles to the municipal sector.

It has since diversified and now supplies trucks to a broad customer base, on contract hire and flexible long and short-term rental deals. The company’s 100-strong fleet includes rigid trucks, tippers, skip loaders and refuse collection vehicles, as well as box-bodied, curtain-sided and drop-side rigids, while it also runs a thriving service operation.

The company relocated last month from its previous home in Ponteland, Newcastle, to a new base on Chainbridge North, Blaydon, complete with fully refurbished and comprehensively equipped six-bay workshop.

The move, which represents a £500,000 investment, reflects strong demand for the company’s vehicles and services, and its confidence in the future. Key to that confidence is its decision to enter the temperature-controlled vehicle market.

“It’s yet another string to our bow,” Business Development Manager Allun Cairns explains. “There are not many other companies offering refrigerated vehicles for contract hire and rental in this part of the world, so we view this as a big opportunity to grow our business.”

Premier Truck Hire’s optimism about the prospects for its new venture received a boost when two of its first three vehicles were immediately snapped up Gateshead-based fruit and vegetable distributor JR Holland Food Services on a contract that will take them through until next spring.