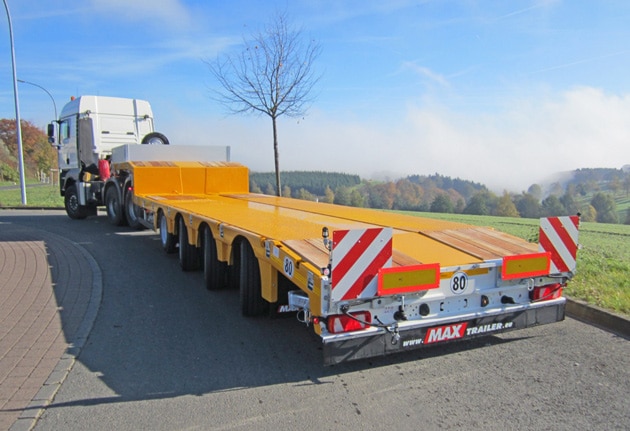 Max Trailer, a subsidiary of Luxembourg’s Faymonville brand, has released power-steered versions of the MAX100 and 200 models, which were only available with fixed or friction-steered axles before.

The MAX100 model is an extendable semi available with three and four axles as required, while the 200 version is a three-axle extendable and non-extendable flat deck variant.

While parent company Faymonville is specialising in customised transport equipment, the Max brand is supposed to provide a more standardised choice to the market. The power-steered Max100 and 200 stay in line with that philosophy.

Using a steering wedge on the fifth wheel coupling, the steering angle is transferred hydraulically to the axles. Compared to the classical friction-steered version, the power-steered Max trailers are said to improve manoeuvrability notably.

“The small turning radius and user-friendly handling in turns makes any driver’s job simpler, as the loading area is easier to reach because less space is needed when turning,” the company said.

“Reduced tyre wear is an additional economical advantage. Moreover, the hydraulically forced steering system offers the possibility of manually readjusting the steering, even independently from the truck’s fifth wheel.”