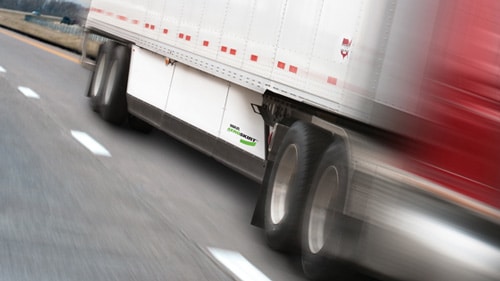 Wabash Composites, a division of US trailer giant Wabash National, has produced its 100,000th DuraPlate AeroSkirt.

Wabash National developed the side skirt in 2009 to address customers’ needs for improved fuel economy. The aerodynamic solution is said to improve fuel economy by up to six per cent and provide a low total cost of ownership for fleet owners.

“This week our company reached a noteworthy milestone,” said James Scarcelli, Vice President and General Manager, Wabash Composites. “Achieving this milestone in fewer than five years is … evidence of our leadership in trailer aerodynamics and reflects how this expertise translates into aerodynamic products that provide the greatest combination of durability and fuel efficiency.”

The EPA SmartWay-approved AeroSkirt is based on a structural composite material, DuraPlate, and consists of two external steel skins thermally bonded to a high-density polyethylene (HDPE) core. A proprietary spring-bracket design allows for inboard and outboard deflection, to further resist potential impact damage.