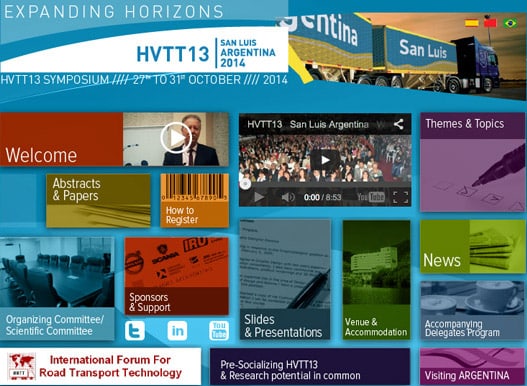 The countdown has begun – HVTT13, the International Symposium for Road Transport Technology, will be held in San Luiz, Argentina, in less than a year from now.

The theme for the 13th edition of the biannual event is ‘Expanding Horizons’, as the organising committee officially revealed last week. The conference will cover innovation in vehicle technology and design, as well as heavy vehicle transport policy and sustainability.

The website for the event is now online too – including a countdown clock indicating the time left to the next reunion of the world’s most transport technology elite.

The location of the 2014 event has been chosen for its pioneering role in the implementation of Heavy Combined Vehicles (HCV) in the Mercosur region. First trials with B-doubles – a configuration already running in Australia, South Africa and Sweden – started in 2008, with the support of Heil, Swedish truck brand Scania and local business, Avellaneda Cements.

Today, even more trailer manufacturers in Argentina have joined the trial and invested in the B-double project, which is likely to gain more traction until the start of the event. According to local consultant Dr Alejandra Efron, national approval of B-doubles is closer than ever.