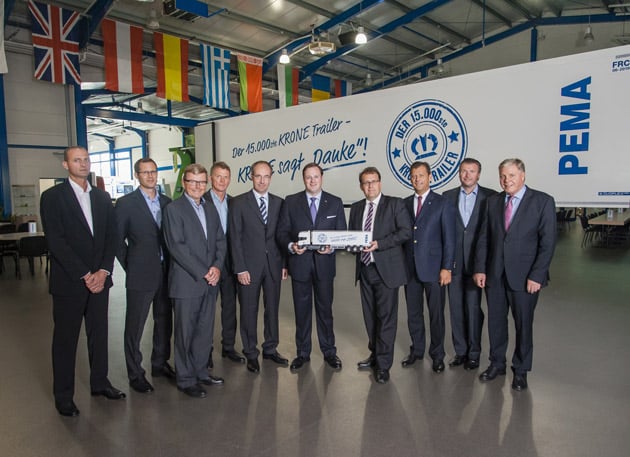 “We are thankful that we have been able to count on PEMA as a customer from as far back as 1990. So it is not by chance that the 15,000th Krone trailer for PEMA is a refrigerated semi-trailer, because PEMA has always supported us since we entered the refrigerated sector,” Krone said – emphasizing that the rental company has made a “key contribution” to the development and success of the Cool Liner range.

PEMA CEO Peter Ström also pointed out the close relationship between the two companies that developed over the past years. “The quality of the Krone vehicles is exemplary and when it comes to securing loads, Krone offers first class solutions time and time again which frequently come as standard. Such advantages facilitate our rental business.”

PEMA was founded in 1976 and has since grown into one of the leading companies for truck and trailer rental in Germany. Now part of the Equipment Finance business line of French banking group, Société Générale, it can draw on a fleet of more than 18,000 vehicles, the majority of which are provided by Krone.

PEMA is renowned for operating its own, independent telematics portal, offering its vast clientele the option to monitor all trucks, trailers and swap box bodies remotely to optimise fleet management. PEMA is currently present in Belgium, Denmark, Germany, Poland, Sweden, Switzerland, Slovakia, and the Czech Republic.