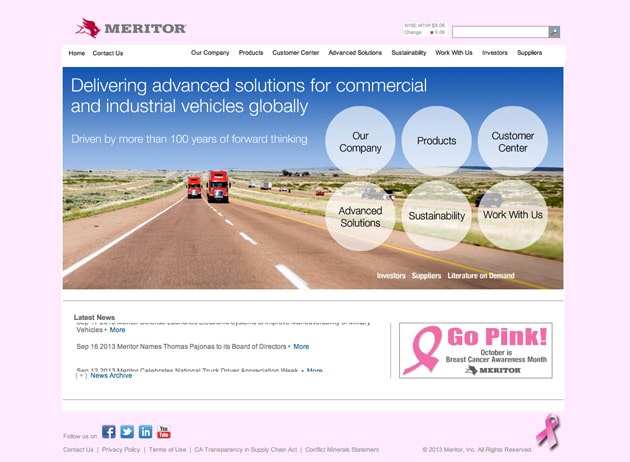 For the third consecutive year, US company Meritor is supporting Breast Cancer Awareness Month during October.

Lohr has 27 years of motorsports experience and is the only woman driver to win a race in the Deutsche Tourenwagen Meisterschaft, the international German touring championship. Meritor began sponsoring Lohr in 2012 and provides axles and brakes for her race truck.

“Meritor is a strong partner with a great sense of social responsibility,” Lohr said. “I am proud to have the chance to be active in this important issue.”

During the month, Meritor’s world headquarters in Troy, Michigan, will host “Carnations for a Cure,” a fundraiser benefitting the Barbara Ann Karmanos Cancer Institute. For a $10 donation, employees can buy a dozen pink carnations on their way home from work to remind a spouse, girlfriend, mother, grandmother, sister, daughter, friend, coworker and others to get regular mammograms.

Also during October, a guest speaker from the Barbara Ann Karmanos Cancer Institute will talk with employees about breast cancer awareness and prevention during a “Go Pink” pancake breakfast.

“Meritor is committed to furthering awareness and raising funds to support education, research and treatments for breast cancer,” said Krista Sohm, Vice President, Communications, Meritor. “Any support we can provide may help save more lives.”