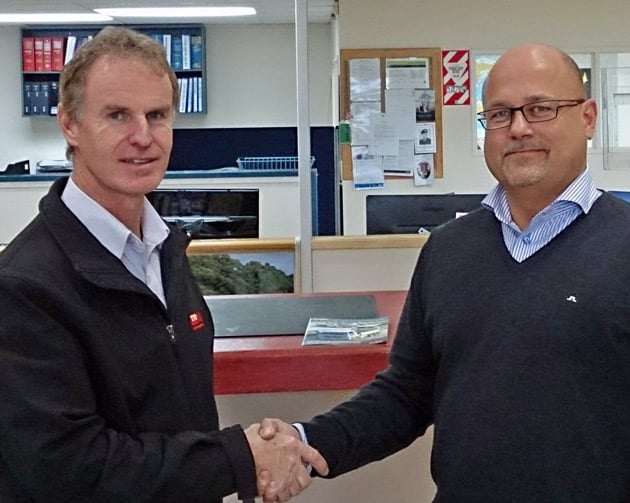 According to Hammar, the move is supposed to broaden the brand's offering in the New Zealand market; but the new model may also be sold in other countries in the future.

To date, the Swedish side-loader specialist has concentrated on producing models that feature a pair of cranes only, designed for handling containers up to 45 tonnes.

However, many containers are moved either empty or lighter than 15 tonnes, so in some cases it would be inefficient and costly to transport them with a side-loader designed for fully loaded containers. The TRT three-crane solution is now supposed to fill the gap.

Background: Around 20 years ago, TRT was asked by local company Tapper Transport to come up with a solution to handle empty containers and designed the three-crane model, which is able to lift and transport one 40’ or two 20’ light containers.

Back then, the three-crane version was designed to be pulled by a single drive prime mover at lower capital cost than larger trailers. It has a low twist-lock height for Hi Cube containers and its low tare weight results in greater productivity.

While TRT announced it will be concentrating on other parts of its business going forward, Hammar commented it had been looking at developing a similar concept before.

“It was very timely – Hammar had been interested in the three-crane side-loader and we were too busy with other projects to be able to devote the resources to market it and develop it further, so the sale made sense,” says Bruce Carden, Manufacturing Director at TRT.

“It’s nice to see an internationally renowned company like Hammar recognises the innovation and engineering know-how at TRT. It’s something we pride ourselves on and we are happy that the three-crane side-loader is going to live on and benefit.”

The deal means the development and production of the former TRT 3-crane Sideloader will shift to the Hammar factory at Takanini, South Auckland. Reportedly, Hammar has already applied to the council for planning permission to extend the factory to boost floor space with the aim of adding at least another two production lines.

Fred Sandberg, Managing Director of Hammar New Zealand, said: “There will be a need for more staff – in fact, we have been looking for some time and with the three-crane model we definitely need to increase our numbers and get the right people.”