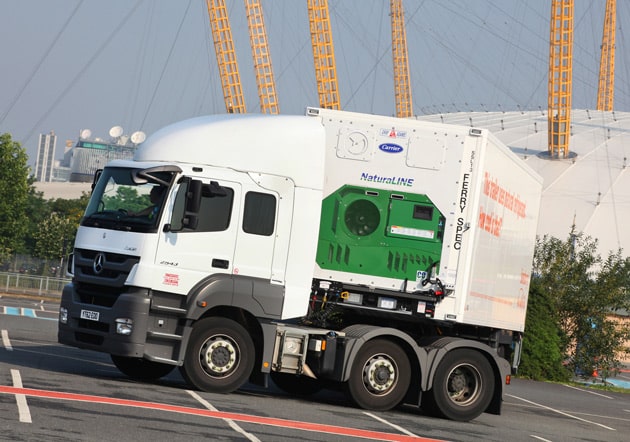 UK supermarket chain Sainsbury’s is trialling what is said to be the world’s first naturally refrigerated trailer to transport chilled and frozen goods.

Sainsbury’s is working with US company Carrier Transicold in a two-year trial of the new HFC-free cooling technology for road transport, using a modified version of Carrier’s NaturaLINE refrigeration system, which was initially developed for deep sea containers and completed a rigorous sea trial programme in 2012.

Nick Davies, Sainsbury’s Head of Transport Operations, said: “The new carbon dioxide technology has much less of an impact on climate change and we hope it will play a big part in helping us reduce our carbon emissions.  We will be monitoring its performance closely and if successful, in line with our replacement plan, it could help us save over 70,000 tonnes of CO2 compared to the current refrigerated trailer fleet.”

David Appel, President of Carrier Transicold, said: “This is the very first time that our NaturaLINE system has been mounted to a box trailer anywhere in the world. It’s a fantastic opportunity to advance Carrier's natural leadership in environmental technologies, by working closely with Sainsbury’s … to test how the concept performs on the road. “

Underpinned by its 20×20 Sustainability Plan, Sainsbury’s aims to reduce its depot to store transport CO2 emissions by 35 per cent by 2020 and achieve an absolute reduction of 50 per cent by 2030, against a 2005 baseline, despite the growth of its business.