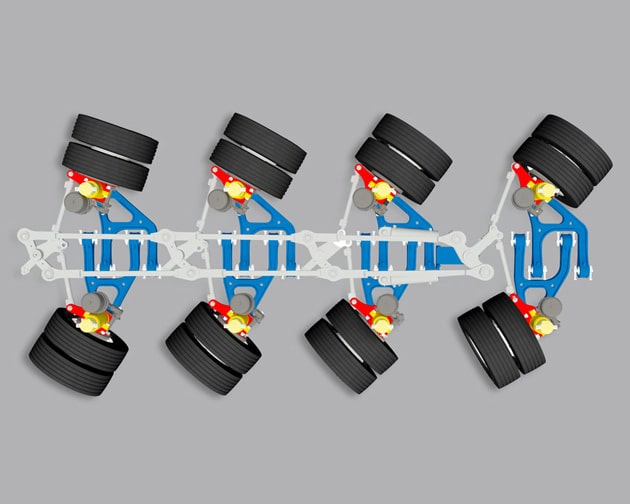 Presented at this year's Bauma trade show in Munich, the MPA system – comprising just one wheel carrier, strut and suspension arm – is based on the MacPherson principle and has undergone extensive testing over the last few months to ensure the new design is structurally sound.

“We simulated vehicle performance with MPA axle technology on a ‘hydropulse’ test rig,” said Chief Design Engineer Volker Schmidt. “All the components passed the tests with flying colours, for example for the maximum load cases and alternating load cycles. We are highly satisfied with the results.”

Goldhofer partnered with German suspension expert BPW to simulate the performance of the wheel suspension under continuous high loads, the forces to be absorbed by the suspension arm and strut, and their effects on the vehicle frame. A special measuring system was employed to analyse the loads imposed on the various components and also on the frame.

“We wanted to know exactly what happens to the individual components, when and how they react to which load,” said Schmidt. That provided Goldhofer's engineering team with a precise analysis of road contact forces and cornering forces and enabled them to measure the impact of hard braking manoeuvres on the new suspension system.

For this purpose, lateral and braking forces were introduced into the MPA system in addition to the vertical loads applied as standard. “The fact that the components were tested on our partner’s ‘hydropulse’ test rig in accordance with BPW’s high standards makes the extremely positive results all the more significant,” Schmidt said.

BPW will contribute the wheel carrier to the new system, fully equipped with the brand's Eco-Plus wheel bearing and braking system.