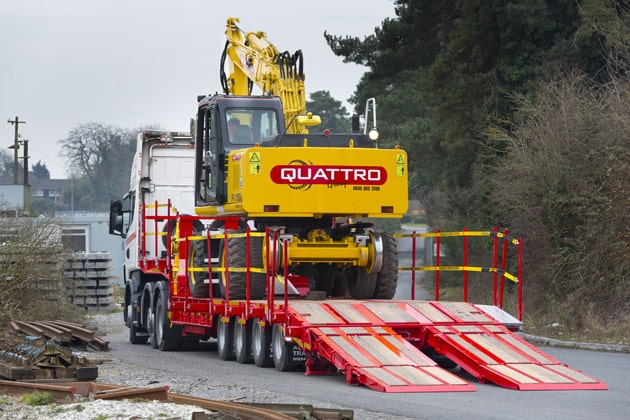 London-based plant hire business Quattro Group has invested in standardising and modernising its fleet of trailers with an order for 10 SFCL 67 four axle step frames from UK company Andover Trailers, worth nearly £700,000 (€827,000).

According to Andover, each new trailer features a low profile neck, plus rail lines in the floor of the neck, lower deck and beavertail to allow easy loading of specialist wheeled and tracked ‘road rail vehicles’ (RRVs).

The specification also includes two fixed and two self-tracking BPW axles to aid manoeuvrability and minimise tyre wear; as well as BPW air suspension with a Wabco raise/lower valve, which can be used to lower the trailer for loading and unloading. Slide out extensions are fitted to the deck, bridge and beavertail to assist with loading wide machines.

Worth approximately £70,000 each, the trailers are fitted with a number of safety features including slide out safety lights, halogen reversing lights, strobe beacons on the rear ramps and floodlights all the way round the trailer for safer working at night.

The trailers also feature a bespoke working at height system, which Andover has engineered for use even when the side extensions are deployed.  This means that when loading wide machines, such as an excavator, it can be set-up around the outside of the excavator’s tracks, to ensure maximum safety.

The Quattro Group was formed in 1989 in Stratford and is responsible for providing 30 per cent of the specialist wheeled and tracked RRVs used throughout the UK, as well as hiring machinery capable of dealing with a vast range of construction and civil engineering projects.

“Through 23 years of hard work we have become the second largest rail plant provider in the UK, and one of the largest operators of municipal equipment such as gritters. As such, we are committed to on-going investment to keep us ahead of the competition,” said Managing Director John Murphy.