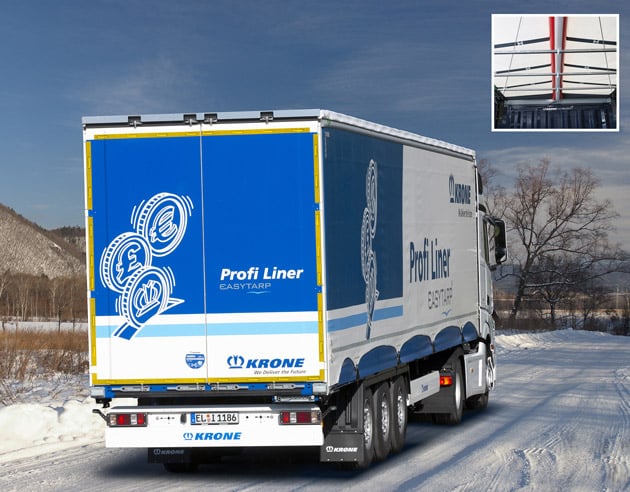 Snow and ice falling down from trailer roofs is a common road hazard in the European winter season. German trailer company, Krone, has now presented a technical solution that is supposed to solve the issue.

The new ‘Ice Protect System’ can be operated from a control panel mounted on the front wall of the trailer. Using an air hose, the curtain is raised lengthwise by about 17.5 cm, preventing the accumulation of water and snow by creating a “peaked” roof. Before setting off, the hose is lowered by pressing a button or when activating the brake, thus allowing the curtain to return to its original state.

“Ice sheets flying off the roof during the winter time are not only dangerous, but they are also a huge problem for freight carriers every day. Only a few service stations provide aids that the driver can use to remove the ice build up before departing,” said Dr Frank Albers, National Sales Manager and Marketing Manager at Krone.

The Ice Protect System is available for all curtain-sided semi-trailers by Krone and can also be retrofitted.