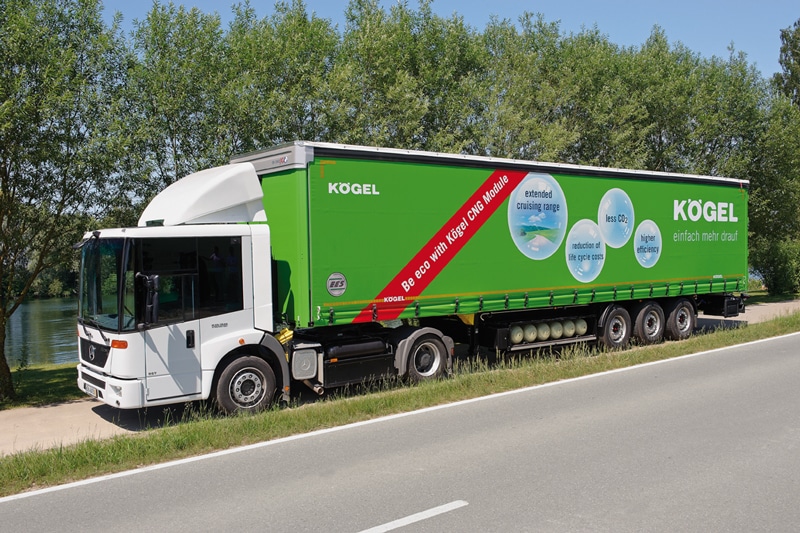 In global trucking, compressed natural gas (CNG) is a trend no company can ignore. US food giant Frito-Lay, for instance, just announced that it will significantly expand the use of CNG technology in 2012.

According to the New York Times, that switching away from standard gas to CNG will save Frito-Lay a significant amount of money, as well as cut the brand’s overall carbon emission. But, there is a downside to CNG, especially in a trucking context – a natural gas-driven vehicle cannot match a regular gas or fuel-powered vehicle in terms of driving range, because natural gas has a lower energy content. Hence, to achieve a cruising range comparable to that of conventional vehicles, larger tanks have to be installed.

Kögel’s new CNG model has now overcome that issue by offering additional storage volume – either inside the pallet box or in-between the chassis – intending to open up the long-haul market to CNG technology.

The retrofittable system can carry notably more natural gas than the actual truck tank, thereby extending the driving range of both all-CNG and dual-fuel vehicles when coupled to the German invention.

According to a study published by the Institute of Energy Economics at the University of Cologne, most existing natural gas-powered vehicles (NGV) that cannot be switched to petrol sacrifice cruising range in favour of better loading space. “NGV cruising range is usually only between 180 and 450 km. This characteristic may deter consumers from adopting the technology.” Kögel now claims that a truck coupled to the new CNG semi can do at least 1,000 km per filling.

The idea is simple: Kögel has utilised the empty space in front of the tri-axle unit to store an additional gas tank that will feed the prime mover if need be. Alternatively, the tank can also be hidden inside the pallet box. According to Kögel, that extra-storage will pay off from day one. With an average CNG consumption of 30kg, the fuel cost per 100km is about €27 – depending on both country and gas quality. A comparable diesel engine would use around 28 litres of diesel per 100km, creating a cost of €37 – €10 more than the gas alternative.

In addition, it is proven that CNG emits significantly less pollutants than “classic” gasoline – although it is a non-renewable energy resource as well and often seen as a bridging technology towards low-emission road transportation. But, while the combustion of CNG also produces greenhouse gas, it is a more environmentally clean alternative to gasoline and diesel, and it is also safer than other fuels in the event of a spill, as natural gas is lighter than air and disperses quickly when released.

To translate that advantage into real life usability, Kögel has designed a simple plug-and-play system to couple and uncouple the trailer as is usual. Whilst the additional tank capacity will decrease payload, the German trailer specialist has announced that the cost advantage and the environmental benefit will outweigh that compromise.