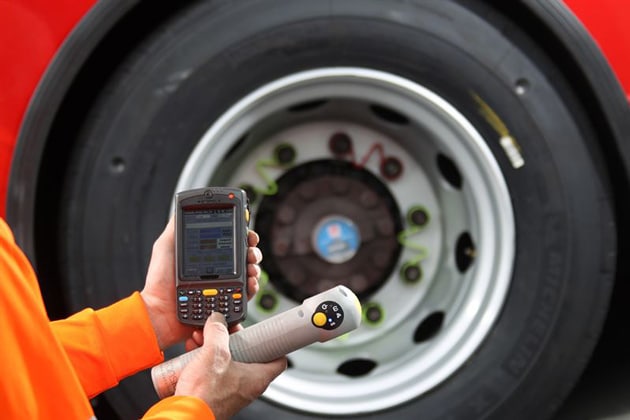 The company believes that its new ‘communicating’ tyres not only make it possible to obtain tyre pressure and temperature data easily, they will ensure flawless traceability of bus, coach, truck and trailer tyres throughout multiple lives in service.

This new generation of tyres are currently being introduced across a fleet of 100 double-decker buses operated by Stagecoach in London, which is the first major European customer for this new technology.  Michelin is confident its innovation points the way to new methods of managing tyres, and hopes more commercial vehicle fleets will benefit soon.

At the heart of the development is an RFID chip and antennae assembly, weighing 0.2 grams and 5cm long, which is built into the Michelin X InCity tyre casing. In conjunction with a separate wheel rim mounted TPMS, the chip enables key data including the tyre pressure, temperature and the serial number of the tyre to be identified using an easy-to-use probe that can also record tread depths. The probe provides an electronic link between the tyre and a data processing system, with all information quickly downloaded into a handheld PDA unit.

Bill Schafer, Commercial Director of Michelin’s Truck and Bus division in the UK and Republic of Ireland, explains: “This new technology allows a technician to gather complete, extremely accurate tyre information in significantly less time than via a manual inspection.  It also makes pressure checks safer; and since the valve is not opened, there is no loss of air.

“The increased speed of these checks will help fleets ensure their tyres remain in optimum condition for longer.  This brings multiple benefits, since tyres maintained at the correct pressure last longer and improve fuel efficiency, which in turn reduces CO2 emissions.”

Michelin estimates that a tyre inflated to 1 bar less than the recommended pressure increases fuel consumption by up to 0.4 litres per 100 km.  Tyres inflated 10 per cent below the recommended level experience a 15 per cent reduction in tyre life, whilst 30% underinflation reduces tyre life by 50 per cent.  Studies of fleet operations also show that 75 per cent of tyre-related incidents are due to slow air leaks.

The introduction of this combined TPMS and RFID technology to the Stagecoach fleet in London is part of Michelin’s vision for the future.  Schafer explains: “The goal is to continue putting the pieces in place to enable this new technology to be incorporated in more Michelin tyres, and made available to a wider customer base.  We see TPMS and RFID-equipped tyres representing the future for many large commercial vehicle fleets.”

Michelin’s RFID research and validation process has seen more than 20 different patents registered.  Whilst the principles involved are not entirely new, RFID has been around commercially in less developed forms for the last 50 years and TPMS has also been widely used for some time.  However, the way in which these two technologies are being harnessed in what Michelin describes as ‘a fully-fledged eco system’ is new.

The RFID chip needs no battery as it is powered by the electromagnetic waves given off during data collection. Chip lifespan is considerably longer than that of the tyre, and it is uniquely designed to survive Michelin’s Remix remoulding process, enabling the same sensor to be used in all stages of Michelin’s Four Lives offer.  Furthermore, the chip cannot be worn off or lost, as a bar code label can, because it is embedded in the tyre’s construction.