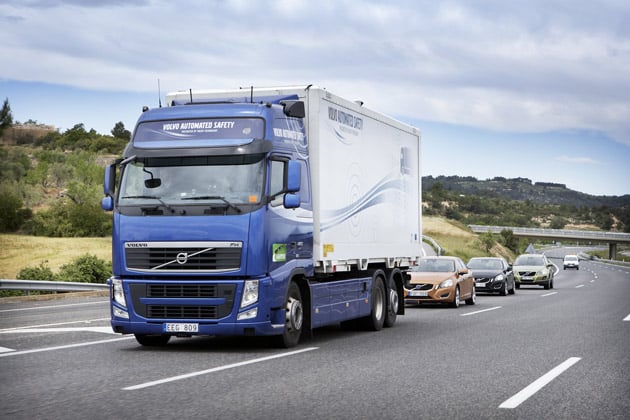 For the first time ever, a Volvo truck has led a platoon – a convoy in which vehicles automatically follow a lead vehicle – on a motorway among other road users.  The exercise took place on a motorway outside Barcelona, Spain, as part of the ‘Safe Road Trains for the Environment’ (SARTRE) project.

Grouping vehicles into platoons is a method of increasing the capacity of roads by decreasing the distances between cars using electronic, and possibly mechanical, coupling. Volvo’s ‘road train’ – consisting of both trucks and cars travelling among other road users – covered 200 km in one day.

Building on the brand’s existing safety technology – including features such as cameras, radar and laser sensors – all vehicles involved automatically monitored the lead truck and other vehicles in the area. Based wireless communication, the vehicles in the platoon “mimicked” the lead vehicle’s movements using Ricardo autonomous control – accelerating, braking and turning in exactly the same way.

“The truck behaved exactly as expected, and the following vehicles responded just as planned,” said Andreas Ekfjorden, project manager for Volvo Trucks in the SARTRE project who was also the test driver of the lead truck in Spain.

In the haulage industry – where fuel efficiency is a highly critical success factor – these findings raise questions on how the savings should be distributed. To this end, analysis of business models for platoons is an integral part of the SARTRE project. “Haulage firms stand to gain from platoons, but more work needs to be done before it is possible to say what a working business model will look like,” said Frida Ramde, intelligent vehicle technologies manager at Volvo Trucks.