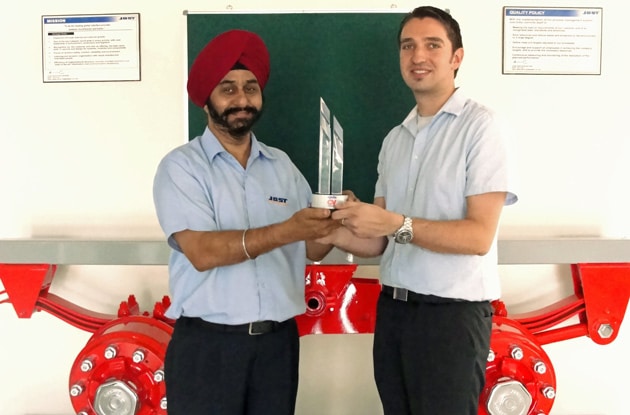 Indian trade magazine, Commercial Vehicle, has awarded the Apollo CV Award 2012 to the new Jost-Gigant trailer axle, which has been developed by Gigant for the Indian market and produced in a joint-venture with Jost in India.

More than 100 products had been entered for the prize. In particular, the jury praised the design and construction of the new trailer axle which is characterised especially by its robustness and durability together with outstanding ease of maintenance. CV Chief Editor, Sridhar Chari, presented the award on 30th April 2012 in Mumbai to GS Pradeep, sales manager of the Indian Jost-Gigant joint venture.

“With this prize, the jury underscored the fact that we are very much on the right track with our proven combination of robustness and easy maintenance,” explained Mark Gehle, Gigant's Managing Director, about the award. “Especially in India, with its sometimes very difficult road conditions, these characteristics are enormously important.”

The Apollo CV Award has been presented since 2010 by the Commercial Vehicle magazine and is considered to be the most important award in the Indian commercial vehicle market.