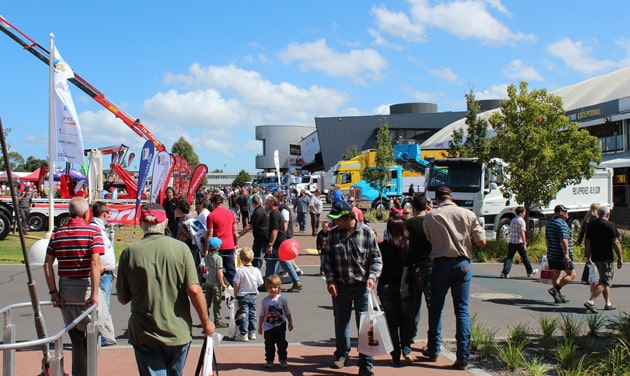 Recognised by the industry as the largest and most significant dedicated display of trucks, trailers and ancillary equipment in the southern hemisphere, the International Truck, Trailer and Equipment Show (ITTES) wrapped up on Saturday after a highly successful three-day exhibition at the Melbourne Showgrounds. Pulling in a crowd of 37,133 local and overseas visitors, including industry leaders and heavyweights, the show highlighted the newest in transport technology and innovation and put on a display of the highest-calibre trucks, trailers and equipment ever seen in Australia.

When compared to ITTES attendances from 2010, attendees on Thursday increased by 12% followed by a slight drop on Friday when inclement weather set on, however perfect show weather on Saturday delivered a show record single day attendance figure ensuring massive amounts of foot traffic to all exhibitor stands. The show also attracted the highest number of international guests in its short history with delegates from more than 45 countries visiting the event.

The 2012 ITTES kicked off on Thursday and exhibitors were eager to showcase the latest innovations and technologies of the transport world. More than 350 companies, many with multiple displays, took full advantage of the three days, encompassing every inch of the 19-hectare indoor and outdoor show space.

“The feedback and comments from every exhibitor that I have spoken to thus far has been nothing but positive, with many reporting strong sales and high quality business leads,” said Clint Hendry, Show Director of the ITTES. “Many couldn’t believe the sheer quality of visitors to the show on the opening morning with all the major buyers of equipment in town, ensuring an ideal platform for business transactions to take place.”

Exhibiting companies expressed glowing feedback about the number and quality of leads received and sales completed throughout the show. Some companies even reported that major transactions were executed on the first day, resulting in profit growth and a 100 per cent return on investment.

One of the most popular show attractions was the Exhibition Pavilion, which housed every major trailer manufacturer along with the CAT Truck brand that was of significant interest as it was making its inaugural ITTES appearance. Add to that the impressive variety of trailer types and configurations, as well as all the latest innovations and advancements in trailer building and manufacturing, and it was easy to understand its popularity.

Every major truck manufacturer in the industry pulled out all stops to attract show visitors to their stands. All the truck industry leaders – Western Star Trucks and MAN Automotive Imports, Daimler, PACCAR, IVECO Trucks, Isuzu, UD Trucks, JAC Trucks, Scania, Hino, Mack and Volvo – delivered the best in light, medium and heavy commercial on and off highway vehicles, with many exhibitors in their own dedicated pavilions, which were transformed into luxurious custom exhibits. The majority of exhibitors also hosted on stand functions with VIP customers. These proved to be extremely popular and further added to the quality of trade visitors in attendance.

An impressive roster of ancillary equipment exhibitors lined the walls of the Nicholas, Agricultural, Centenary and Victorian Transport Association (VTA) pavilions, as well as the show’s coveted Grand Pavilion. Here, some of the world’s leading brands put on their ‘best in show’ under the ‘big top’ taking centre stage with their colourful stands and interactive displays. Exhibitors in these buildings have already expressed their gratitude in the increased visitor traffic flow brought about by a revamped signage design, the painted roadways and the IVECO power mobile show guide phone app.

The show included a wide array of exhibitors from all around the network: government, manufacturers, parts and services suppliers related to the transport industry, industry associations, non-profit organisations, academic institutions and other end users. The show’s organisers and platinum sponsors were pleased with the turnout and remarkable support from everyone involved.

“The success of this event clearly proves that advancements in transport are of keen interest for professionals and industry workers in Australia and all around the world,” said Hendry. “Moving forward, we’ll continue to increase awareness of the industry while raising the profile of our exhibitors and the industry in bigger and bolder shows ahead, at a cost that’s both reasonable and affordable.”

To conclude the trade event, more than 700 people attended the Flemington Event Centre for an exquisite Expo Awards Gala Ball on Saturday evening. With a world-class line up of entertainment, headlined by Joe Camilleri and The Black Sorrows, 80’s cover band Stand and Deliver and the amazing unusualist, Raymond Crowe, the who’s who of transport celebrated their collective show efforts.

Exhibitors were reviewed by a panel of independent judges who evaluated companies based on their exhibit’s design innovation, effective use of space, product knowledge, staff presentation, approach to customer service, as well as other criteria.

The 2012 ITTES Expo Award winners were: