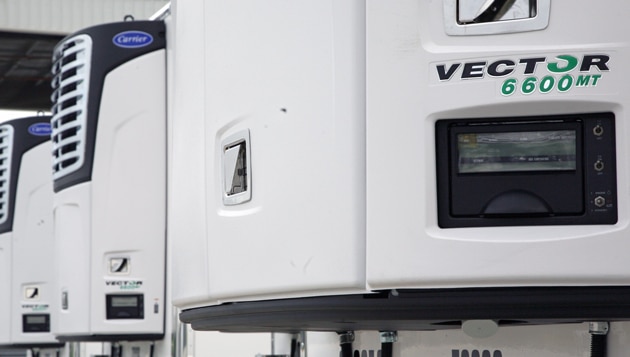 Carrier Transicold has announced that recent company testing has determined its hybrid Vector trailer refrigeration is the quietest diesel-powered reefer in the North American market.

The Vector 6500 single-temperature unit was tested by Carrier Transicold in accordance with ARI Standard 1120, paired against a competitive unit of comparable capacity equipped with a factory-installed sound-reduction package. When running in high-speed cooling mode, the Vector unit’s sound output measured six decibels quieter than the competitor.

“Putting this into perspective, it would take four Vector units running in high-speed cooling mode to produce the sound volume of a single conventional competitive unit equipped with a noise abatement package,” says Dave Kiefer, Carrier Transicold’s director of marketing and product management.

“In the high-speed heating test, the Vector unit was even more impressive,” Kiefer adds, explaining that, unlike conventional units, Vector units heat with electric resistance strips, which do not require use of the compressor. In the high-speed heat mode, the Vector unit measured 10 decibels quieter than the competitor, with a sound output that is low enough to be comparable to the decibel range of normal conversation.

Contributing to the Vector unit’s low sound output is its all-electric refrigeration system, which reduces the number of mechanical components that might contribute to engine and compressor noise.

“Although conventional trailer refrigeration systems, including our own X2 series, have been designed over the years to perform more quietly, the issue of noise is more relevant than ever,” says Kiefer.