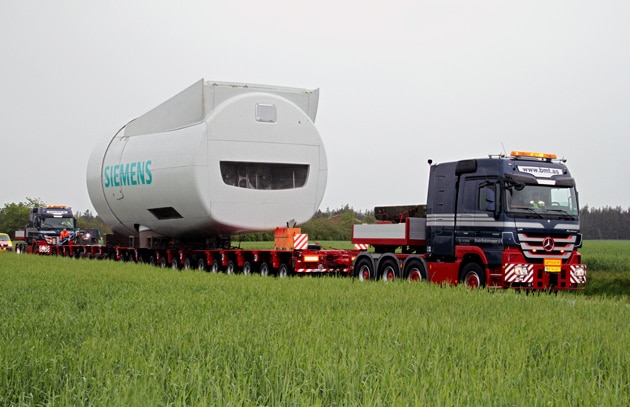 Danish transport company, Brande Maskintransport, has been engaged to transport a prototype of the new Siemens SWT-6.0-120 nacelle to a windmill test centre in Høvsøre, Denmark.

But, during the 138km journey from Brande, Denmark, to Høvsøre, the 58m-long convoy had to cross three bridges, limiting the road axle load to 14 tonnes. As a result, the Danish transport specialist decided to use Nicolas Industrie’s MHD series, a modular platform vehicle boasting a robust frame construction and a high bending moment, predestined to carry the oversize nacelle.

Although Brande itself has a fleet of 200 Nicolas MDEL platform vehicle axle lines, the unusual freight task required the use of a specific kind of technology. Hence the company had to borrow 22 Nicolas MHD axle lines from Norwegian affiliates Statnett Transport and AS Maskintransport.

“Due to the technical axle load of 36t and the robust frame design, the MHD was able to provide sufficient reserves carrying the extreme load,” Brande stated. “The steering angle of 55 degrees was particularly useful when negotiating the numerous traffic islands en route to Høvsøre and guaranteed a high level of manoeuvrability in tight spaces when driving through small towns and villages.”

The combination was pulled and pushed by two Mercedes Actros, each equipped with a turbo coupling. With an average speed of 8 kilometres per hour, the 58m-long and 8m-high convoy completed the 138 km route in 17 hours.

Siemens Energy has just erected the first prototype of its new generation of offshore wind turbine plants close to the town of Høvsøre in Denmark and commenced the test phase. The new SWT-6.0-120 wind turbines generate up to six megawatts of power and have a rotor diameter of 120 metres.